work by artichoke mosaics exhibited at the opus gallery in exeter 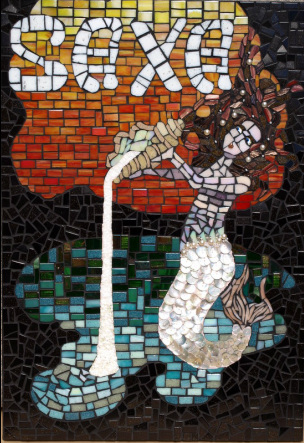 
For me, the exhibition theme conjured up Art Nouveau in its most graphic form and in particular the posters of Mario Borgoni, a member of the Italian Liberty Movement.  I was inspired by his use of a cursive frame, as seen in his design for the Birra Milano beer poster.  The subject matter for my mosaic was influenced by the painting Circe Invidiosa, by John William Waterhouse which led me to design my own advertisement for Saxa Salt – The Mermaid’s Choice.  Mother of pearl buttons and tiny seed beads made perfect fish scales and falling salt grains. 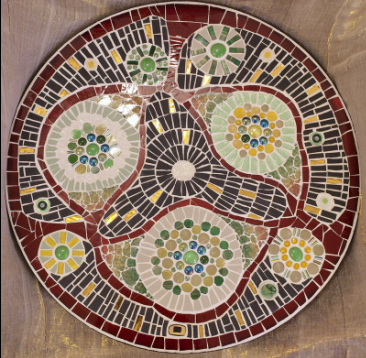 International Year of the Forest Exhibition


I feel a great affinity with trees.  The exhibition theme encouraged me to investigate this feeling and I discovered that there is an analogy between the vascular system of plants and that of humans.  Similar to our veins and arteries, trees have phloem (to transport sap and sugar) and xylem (to circulate water and minerals).  Theologically speaking, humans are microcosms of creation; we encapsulate the structure, elements and qualities of the macrocosm.  My piece was inspired by these discoveries and by the patterns I saw in the stained cytology slides of Corylus avellana (Common Hazel).

'High Tide in the Carrick Roads'


Living in Cornwall I’m surrounded by the ocean and I was inspired by the tidal creeks of the Carrick Roads that reach inland from Falmouth.  I wanted to recreate the configuration of the River Fal as a mosaic map. Using a tide timetable I made a collage of the waterway which I painted before covering in tempered glass, giving the effect of a reflective, watery surface.  Winckelmans porcelain and stained glass were perfect materials for capturing the patchwork of fields and seed beads for representing the woodlands.  It’s my mosaic version of a bird’s-eye view! 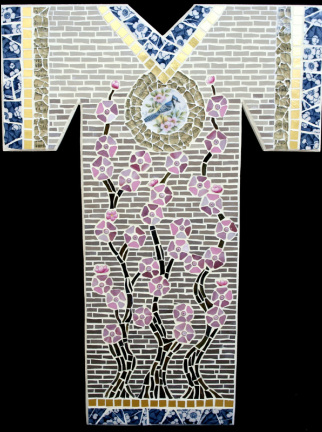 
The Sakura Season - cherry blossom time - is considered by many Japanese to be a metaphor for life itself, a period to reflect on achievements and think ahead to the future; it symbolises the transience of life and is an annual reminder that time is precious, reminding us to enjoy the ephemeral quality of nature while we can.  I was inspired by this philosophy to create a design for a kimono that would represent the Japanese custom of Hanami - cherry blossom viewing - incorporating the theme of birdsong.  I selected my favourite materials: gold smalti, recycled ceramics, unglazed porcelain, millefiori, stained and tempered glass over vintage sheet music.

'Below Helman Tor: Where Dragons Dwell'

'Treasures of the Towans' 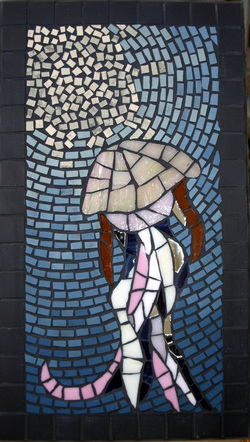